We arrived at the track first thing Thursday morning ready to find the bike and get tech done so we could get on track. The bike had been delivered to the Barber museum so we talked to the right people and got some guys to help us lift the bike crate on to a trailer and over to the pits. People here are so helpful and keen to do anything they can. We got setup in the pits with a e-z up supplied by local rider Kenny Cumming's from nycNorton. It's was so great to be back at Barber, the track is so fantastic with the best track surface and not one part is flat. Every corner is either going up or down. The whole facility is very well presented. It’s like turning up to a golf course but it has a race track instead.

Had first practice day with the bike running great, doing everything right. We had different fuel setups to try the next day so we hoped to be going faster again. Practice day two went very well again for us on the Eureka Racing 500cc es2 Norton sponsored by Service Engineers LTD. Tried the new carburetor set up and got some good power gains from the start. Spent the day on getting the jetting right with the combination of the exhaust temp sensor and reading the plugs. I myself am learning a lot about these types of things which is great for me to help with my feedback when I come back off the track. Peter Lodge (bike owner) and I work great together and the bike speed shows this on the track setting the fastest times on the day. First day of racing was coming up so I was getting pretty pumped now to see how we go against the hot Manx Norton’s and B.S.A.’s that are just as well tuned. Things are looking really good at this stage!. 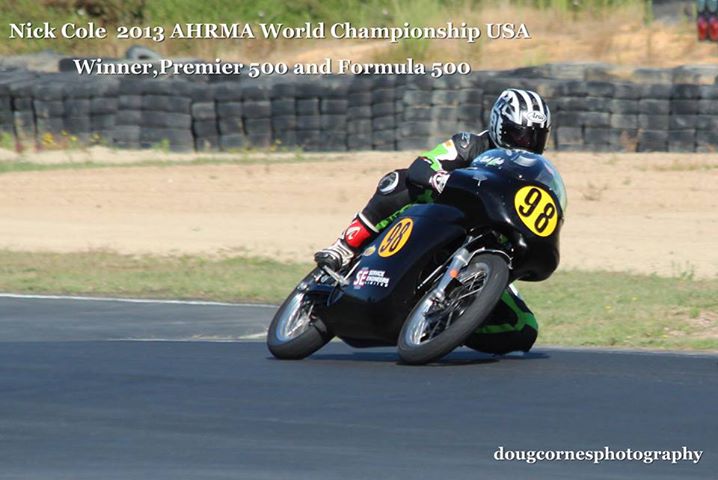 We had a very good day one racing at Barber taking two dominant wins both from the third row on the grid. There was no qualifying as the grids are set by AHRMA points from previous rounds but this is the first round of the world champs. First race up was the Formula 500 race which I won by over ten seconds and the second race which is the main event in the 500 Premier class I managed to win by 4 or 5 seconds. I had to work hard on the first couple of laps to pull the leader Tim Joyce in, made the pass and lucky for me he made a mistake which allowed me the gap that I held and extended to the end of the race. So the team and I were on a high going into the next day’s races and setting us up to take maximum points going into the next round of the championship. The bike was on rails and running great. Lapping faster than last time I was here and so very close to the lap record!! So I was looking to do the same again and head to Daytona Speedway on top.

Day four at Barber Raceway was another ripper taking wins in both the Formula 500 and 500 Premier World Championship races giving us the clean sweep for the weekend and maximum points heading to the next round at Daytona International Speedway. The bike was faultless all day and we are still tuning it so we can be faster still. The fuel is quite different here to what is normally run in the bike so we are learning each time what works best. Sad to leave this track as it is an unreal place, but leaving with some great memories and story's to tell.

Sitting in Orlando airport waiting to head home with some great memories. Had a fantastic weekend at Daytona taking two more wins in the vintage world championship series securing both titles in the two classes I competed in. First race at Daytona was the Formula 500 race, which had some very nice and very fast 2-stroke machines. I knew I had to get a good start and make a run for it on the infield before they could get the power down on the banking of the nascar section of the track which seems like you’re full throttle for a very long time, a real test of bike speed and reliability of your engine. My plan worked and carried on to the finish un-challenged till the chequered flag. Next up was the big one the 500 Premier race which I knew I really would have my work cut out with Tim Joyce (U.S.A) on his very fast Manx Norton and John Cronshaw (E.N.G) on his B.S.A Goldstar. I had a second row start here so first lap infield was crucial to me sticking with these guys. I got a good start along with everyone else. Tim got a slight gap going onto the banking and I was just out of the slip stream. He wound the Manx up and stretched away around the nascar section. I would pull him back in on the infield section and by the third lap I was getting closer but was thinking I was running out of time until his hand went up and started to slow with a mechanical failure which gifted me the lead and the win giving me a clean sweep to the championships. Thanks for the support and a huge thanks to Peter Lodge for the opportunity and a great bike to ride.

Back in NZ with two World Titles under my belt.